How can you cook the perfect pork tenderloin? Season the meat with salt and pepper, sear in a medium-heat frying pan for a few minutes, then bake at 400F for 20 minutes to an internal temperature of 145F.

Why Choose Pork Tenderloin Instead of Pork Loin?

If you know how to cook it right, you can cook the most incredibly tender pork you’ve ever imagined out of pork tenderloin. The loin is not only thicker but it’s also an entirely different cut – which takes an entirely different process to cook. Here’s a link to the recipe if you want to learn about cooking pork loin.

The bottom line is both are great, but the pork tenderloin results in a more tender baked pork, it’s easier to cook, and it’ll travel faster from the kitchen to your plate!

How to Store Pork Tenderloin Before Cooking It

If you don’t plan on cooking your pork tenderloin the same day you bought it, then remember to store it properly so it doesn’t go bad before you intend to use it!

Raw pork tenderloin can safely remain thawed in the refrigerator for 2-3 days. If you’re not going to use it before then, it’s best to put it in the freezer. It can remain frozen for up to 6 months. In both cases, be sure that the meat is properly packaged by being well-wrapped and sealed.

Now that you have some background knowledge to help you with selecting and storing pork tenderloin, let’s dive into this recipe and cook something amazing.

If you are taking the pork out of the freezer, give it enough time to thaw before you do anything else with it. Frozen pork tenderloin can take more than 12 hours to thaw, so the easiest thing to do is to put the frozen meat in the fridge the night before you intend to cook it.

If you forgot to do that, you can use your microwave’s defrost button to thaw the meat. Just be sure to take the pork out before it actually starts cooking!

Pork tenderloin doesn’t require much from you other than a little bit of salt and pepper. Remember to always season meat on both sides!

Additional seasoning options that some people use include soy sauce, bbq sauce, chicken broth, hot sauce, and dijon mustard. Make your own combination in a small bowl, adding just a little for a very mild flavor, or a lot for a super flavorful tenderloin.

Roasting Pork Tenderloin in the Oven

Oven cuisine seems easy, but it still calls for special attention. The majority of the time taken making pork tenderloin following this delicious recipe is spent cooking pork tenderloin. The oven does most of the work, but in order to give baked pork tenderloin that special something that makes it stand out from other oven recipes, you’ll need to give it some pre-care on the stove before popping it into the oven.

In order to cook the best pork tenderloin possible, you’ll need to use both a frying pan and the oven. First things first: preheat the oven to medium high heat or 400F (205C ). While the oven heats up, let’s go looking for a frying pan.

Turn the heat on the stove, and place your trusty frying pan on it. Let it heat up for a little bit then pour olive oil there.

Once the olive oil is moving freely around the frying pan, place your seasoned pork tenderloin in it for a few minutes until it reaches a brownish color on the outside.

Step 3: Place everything in the oven

Once the pork tenderloin is brown and ready to go into the final steps, place it in the oven. It’ll take 20 minutes to finish cooking.

After that, remove the pork tenderloin from the oven and plate it.

Don’t let it sit in the oven for longer than necessary, or you’ll risk overcooking it – which can turn a fine piece of meat into a dry, chewy mess! When it comes to thin pieces of meat, time is of the essence.

Even though you’re more than ready to eat, the pork tenderloin isn’t quite there yet! Let it sit for 5 minutes out in the open. After the 5-minute mark, you can get down to business!

With this simple recipe, all you needed was the pork tenderloin, some basic seasoning, a frying pan, and time in the oven. Despite how easy it was to cook, you can enjoy pork tenderloin that tastes like a professional chef was in your kitchen!

How Do You Know When Pork Tenderloin is Done?

The pork tenderloin reaches its cooking point at an internal temperature of 145F (or 62C ). If you have a meat thermometer (like an instant read thermometer), all you have to do is verify the pork tenderloin temperatures by testing the meat at its thickest part. Remember to do it right after you’re done cooking; otherwise, you might get a faulty reading.

If you don’t have a meat thermometer, you can estimate by eye and feel. How? Once the tenderloin is juicy, tender, and a little bit pink, it’s ready!

Is it Okay for Pork Tenderloin to be a Little Pink?

You can eat a slightly pink pork tenderloin – but beware not to be overconfident in your meat’s color. It’s always best to err on the side of caution and let it be a little less pink than what you’re comfortable with.

As you know, a meat thermometer is the best way to check on things – but slightly pinkish pork tenderloin is usually safe.

Why is My Pork Tenderloin Dry?

Avoid any issues and keep an eye on it as you’re cooking – don’t leave until it’s done!

What is the Best Way to Reheat Pork Tenderloin?

It’s always better to avoid the microwave when reheating meat since that method will make the meat dry and less enjoyable to eat. If you do happen to have leftover pork tenderloin, here are some simple alternatives to the microwave you can use to warm up the meat while keeping the texture and flavor it had when you first cooked it.

You can use the following ways to reheat a whole tenderloin, or, cut the tenderloin into pork chops or use sliced pork and heat the same way but for about half the time.

Remember to eat leftover pork tenderloin within 5 days of first cooking it.

Use a deep dish pan and put the pork tenderloin inside. Let it cook for about 20 minutes.

Select a frying pan that you can fit the pork tenderloin in a single layer (You may have to cut the tenderloin into pieces.) and a matching lid.

Place a little cooking oil in the frying pan and turn the stove onto medium-low heat. Once the oil has warmed up, set your pork tenderloin in the pan and cover it with a lid. The lower temperature and the lid help keep the meat moist.

Flip the meat every couple of minutes until the pork tenderloin is warmed through.

Here are some delicious pork recipes that you can make using pork tenderloin. You can serve these favorite recipes for dinner, lunch, in a breakfast sandwich, or at your next dinner party.

Cut a tenderloin or shoulder into 1-inch cubes, toss into a prepared baking dish, and sprinkle with garlic, onion powder, ground cloves, cayenne pepper, cumin, and salt. Add 2 cups of water plus some oil to the lot, stir everything, cover, and braze in the oven or cook in a slow cooker.

Serve the pork carnitas made with pork tenderloins alongside Spanish fried rice or stir fry, and something seasoned with lots of cilantro.

We recommend this method to roast pork tenderloin until it gets the nicest crisp crust and golden color. It involves searing the meat before baking it, adding a spice rub that includes black pepper, smoked paprika, garlic powder, and brown sugar, and then coating the loin in butter and garlic to bake. Top it with orange slices to serve! How to Cook Mussels in The Best Garlic-Shallot Broth How to Cook Corned Beef How to Cook Tilapia to Perfection How to Cook Barley The Best Way for Flavor & Texture 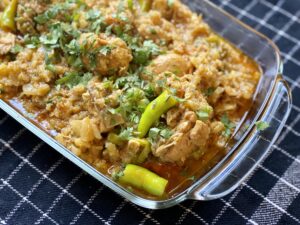