What Is Oregano And 6 Ways To Cook With It

What is oregano? It’s one of the main herbs in spice mixes, and one of the most important Italian herbs. Oregano is used to flavor foods that include summer vegetables nearly any dish with tomatoes — and there’s more than pizza out there.

Oregano, Origanum vulgare, also known as wild marjoram, is an herbal flowering plant in the mint family used as a staple herb in Italian cuisine. It also has many health benefits.

The oregano plant is a perennial herb. It enjoys warm, sunny locations, and can grow up to 2 feet tall. It has tiny white or purple flowers and silvery, purplish, or olive green leaves.

Harvest oregano leaves when the plant is about 6 inches tall.

The oregano’s harvest season can be lengthened by cutting back the plants stems to just above ground, or just by pinching off its flowers as they appear.

Origanum vulgare is the most common culinary oregano. It is sometimes called Greek oregano or Italian oregano. Thanks to the boom in pizza popularity in the 1900s, common oregano found its way to America where it became not only a crucial pizza herb but a common kitchen herb of choice in general.

Make your own dried oregano leaves by laying the oregano leaves to dry in a dark, dry, warm place. Or, hang a bunch of clipped oregano twigs in the same environment until they’re crunchy. You can also freeze fresh oregano by washing and drying the leaves, and freezing in a freezer bag or other airtight container.

Dry or frozen oregano leaves keep their pungency for up to six months.

How Does Oregano Flavor Foods?

Oregano tastes slightly bitter and has a pungent earthy flavor with notes of hay and mint. It’s aroma has notes of camphor.

Oregano essential oils give this herb its strong flavor and smell.

Oregano tastes good in Italian cuisine and any savory dish that includes vegetables, meat or fish. Add flavor to mushrooms with this recipe for The Best Pan-Seared Mushrooms, and sprinkle fresh oregano into salads for a right-from-the-garden flavor. And of course, go wild with fresh or dried oregano in nearly any Italian recipe. Spaghetti?

Pair oregano with other herbs like thyme, parsley, or basil, and garlic, onion, and olive oil.

If you’re out of oregano and you can’t find any growing wild in your flower beds, use marjoram. Substitute half the amount of marjoram that your recipe calls for in oregano.

Other herbs that make good substitutions for oregano include basil, thyme, and savory.

Substitute fresh oregano for dried oregano and the other way around. The equivalent of 1 tablespoon of fresh oregano is 1 teaspoon of dried.

Where to Buy Oregano

Dried oregano is easy to find in small jars in nearly any spice isle. Fresh oregano is often sold on the twig, in a plastic clamshell in the produce section. Look near the refrigerated salad dressings if you can’t find it. 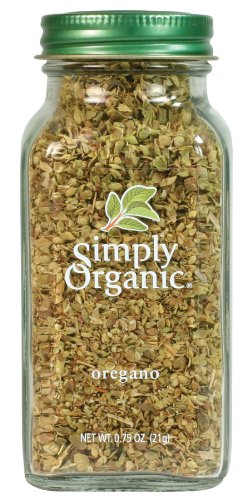 One of the best places to buy oregano is farmers markets, where it is often sold freshly-cut or even as a potted plant so you can start your own herb garden. It’s easy to grow, and all the better harvested fresh!

Oregano has been medically reviewed for its many health benefits. According to healthline, Oregano contains compounds that help fight infections, fight bacteria, and help to strengthen the immune system. The herb is known to heal many ailments including problems with blood sugar and blood clotting, gut problems, high cholesterol, and health conditions.

Oregano essential oil comes with strong antimicrobial activity, and can be used mixed with water and applied topically in place of hand sanitizer. The antimicrobial properties are strong, and so are the skin irritation effects, so use in diluted amounts.

As always, though I’m all about herbs used for medicinal purposes, I’m not recommending anything. Oregano can lead to health problems if used incorrectly, and I know from experience that its skin irritation powers are overwhelming.

Check with your licensed medical provider and scientific references before using oregano medicinally. There’s not enough evidence out there yet to make oregano a regular in the doctor’s office, but your healthcare provider can give you solid medical advice on how to use oregano for its many health benefits.

Half A Dozen Recipe Ideas That Include Oregano What is Nutmeg? An Easy Spice to Re-imagine Cooking What is Cinnamon and How to Cook with it